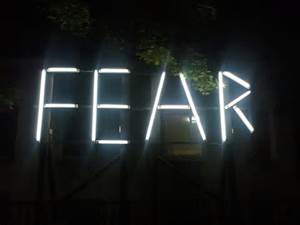 Some people will tell you, “The biggest fear is the fear of the unknown.” They will say this because they have not heard Teal Swan’s contradicting quote, “We do not fear the unknown. We fear what we think we know about the unknown.” This quote changed my perspective towards fear in life because it is eerily true.

Fear is an unpleasant and overwhelming emotion triggered by something that is dangerous or could cause pain. The feeling alerts us to the situation and is mandatory for survival.

Sweaty palms, dilated pupils, increased heart beat, and higher sensitivity to smells and movements are all things someone experiences when they are in fear of their life. However, when someone thinks they are afraid of something, they are actually afraid of the things they think will happen when in presence with their fear.

According to Yahoo the top 10 fears include:

I asked everyone in my journalism class for their specific biggest fear(s),and received a variety of results. Although, they all shared the same base for their fear.

Here’s a list starting from the most common fears to the least common fears according to my classmates: spiders/insects, sharks/the ocean, isolation/the dark, failing, judgement, being replaced, dying, being buried alive, natural disasters, and dentists/doctors.