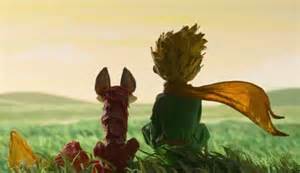 “What is essential is invisible to the eye.”

The red carpet, strobe lights, and stars. The opening night of the Santa Barbara International Film Festival was a sight to behold. The festival, held at the Arlington theater on Friday the third, was kicked-off with the United States premiere of The Little Prince.Many stars, including Jeff Bridges, Riley Osborne, and Mackenzie Foy walked down the carpet to see their film.

The audience flooded the authentic theater and eagerly waited for the lights to dim. Finally, the mayor welcomed the audience to the first event of the Film Festival. Next, Roger Durling, organizer of the festival, walked onto the stage. He thanked us for coming and explained that The Little Prince was the first book he ever read in French. Roger then surprised them by asking the crowd to turn around and introduce ourselves to a neighbor and ask them what makes them special as a way to enjoy those unique little things about others like people used to do as children. He then invited the director, Mark Osborne, to the stage, and told the viewers a little bit about his movie. Finally, he handed the mike to “the dude”, Jeff Bridges, and  Mackenzie Foy. The crowd roared. After talking to the actors, it was time for the movie to begin! The blue curtains opened and the opening night film for the Santa Barbara film festival, The Little Prince, began.

The Little Prince was based off a French book (which also called The Little Prince except in French) written by Antoine de Saint-Exupéry, but the movie took the classic story to another level, weaving the story into a strict and uniformed world. In the film, Earth is a gray place with modern, identical houses, and everyone’s life goal is to become a grown-up.

The movie follows a little girl and the pressure on her to grow up. It starts by showing her mess up an interview to get into a prestigious school called the Werth Academy. Her mother is disappointed with her, but is determined to get her daughter into the school. The two of them pack up and move into the Academy’s school district, but the only house they can afford is next to an authentic old, brown, house, which is in sharp contrast to the rows upon rows of identical houses.

To prepare her daughter for the Academy, the mother creates a schedule, called the Life Plan, for her daughter. It tracks every minute of her day, every day of the week, every week of the month, every month of the year, for every year of her life. Then, through a series of unexpected events, the girl befriends the aviator next door, learns of his encounters with the Little Prince, and is whisked off on an adventure to find this character from her friends past.

Half animation, half stop motion, The Little Prince left all of its viewers with a warm feeling as they walked out of the theater. Based on the phrase “What is essential is invisible to the eye” and that people should not lose their sense of wonder as they grow up, The Little Prince found a place in all of our hearts.