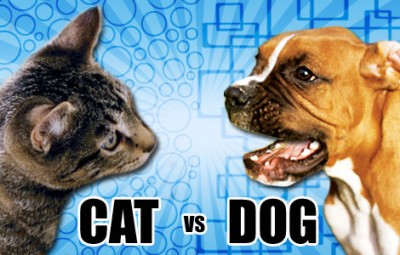 The controversy over cats and dogs has been going on for many years. People have fought viciously against each other over these cute, cuddly creatures. What do people actually think about these 2 animals? The truth about cats vs dogs is a hot debate that rages on.

Dogs are way more playful when a cat will be mellow from time to time. Dogs are more active and good for people who like playing outside. For people who are less active, the cat is an ideal choice because cats like their own space, but when in a playful mood, they will come out of their shell and play. Cats can have a bit of a problem with food. If cats don’t really like their food, they will probably go for that tortilla you were planning to eat. Cats can be very irritating sometimes. When you put on your socks , out of nowhere, a random commando cat may attack you foot. But cats can help people relax and for some reason its purring can make people calm down and become stress free.

The the most popular pet in our Journalism class is…DOGS! About 67% of the class goes for dogs and 33% likes cats. The Animal Behavior Associates say that “74% said they liked dogs “a lot” but only 41% said the same thing about cats” out of a survey of 2000 people (in this survey, the tested people are allowed to like both). Although, it’s not about what animal is better, it’s really about which animal is an ideal choice for you.