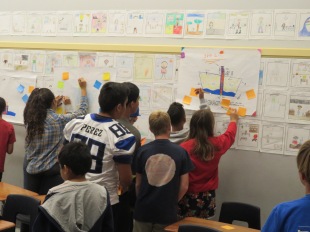 Already 7th Graders have been doing a lot in science.; from experiments and big projects, to quizzes and tests.

Starting out in the beginning of the year, we studied the 5 R’s and then the basic scientific method, and then about scientists. This included learning what SULTAN was, how to draw different types of graphs, and all the specific parts in them. During this we had one of our biggest projects where we drew what we thought a scientist looked like. The second project we had, was a one pager about a scientist of your choice. This concluded that unit.

One of the larger units we’ve been studying has been the Burning Candle Investigation. We started out by actually doing the experiment, and then we went back to it several times gaining new knowledge about it every time. The Burning Candle Investigation is where we put a candle stuck to a piece of clay in a bowl of water and lit the candle. Once the candle was lit we put a plastic tube over it. We noticed that the water from the bowl was sucked up into the tube. The first day of the Investigation we did the actual experiment. Within the days following, we added different variables to the experiment to see what was causing the water to rise.

Some of the variables we tested was adding different amounts of heat, more candles, and more water. My group added more candles, so, therefore, more heat. What we noticed is that when we put the tube over the candle, instead of only a little bit of water getting sucked up, all of it did! So, we could guess that heat was a major variable in the water rising. Instead of Mrs. Kluss just telling us why the water rose she left us with our predictions.

This was probably my favorite thing about science this year. However I wanted to gain more perspectives about what people have been liking about Mrs. Kluss’s science class, so I asked three other students.

Right now we are investigating more into atoms, molecules, and microscopic objects. We have been using microscopes this past week, studying things such as newspaper clippings, blood, and even our own hair! My hope for the rest of the year is that science stays fun, and we keep doing experiments!