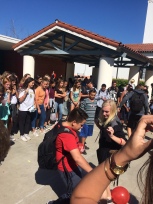 Tuesday kicked off Red Ribbon Week 2016! The activities were the chubby bunny challenge, and balloon popping. For chubby bunny we sat about 8 to 10 people at a table and gave them one marshmallow to start. Once we heard them say chubby bunny clearly they got another marshmallow. Whoever could stuff their mouth with the most marshmallows won.

For balloon popping we handed out balloons to people who wanted to play. You tied the balloon around your ankle and stood in the middle of a crowd of people, the goal was to be the last person standing with your balloon unpopped. The last two people were Santiago Bailey and Randall Martin. The fight to pop the balloons went on for about 5 minutes, people were cheering for Santiago, and some were cheering for Randall. Eventually, Santiago fell allowing Randall a chance to pop Santi’s balloon.

Before both contests began there was pledging to be drug free. You got a sticker, a red wristband, and a nutrition bar. The activities for the first day of red ribbon week was a huge success. The next activity is; Wednesday: Whipped Cream Eating Contest.

Remember this is a week for everyone to feel accepted and get along. Remember to have fun and pledge to be drug free!

Wednesday we had a whipped cream eating contests and pledging. They sat 8 people at a table and filled a plate with whipped cream and had to try and eat the whole thing. Pledging went on again, and they gave away all of the wristbands. A lot of people came and watched and cheered their peers on. It was a fun activity idea, and brought many people together to watch and cheer on their fellow peers. The next activity is; Thursday: Water Balloon Toss

Friday there was a costume contest. They called all the kids over who wanted to enter, and split them into 3 groups. The groups were Most Creative, Most Scary, and Most Funny. They called people onto the stage and whoever got the most cheers wins. 3 people win, one in each category. They took down their names, but they haven’t gotten a prize yet. Overall red ribbon week was a success. Everyone came together and had an amazing time.