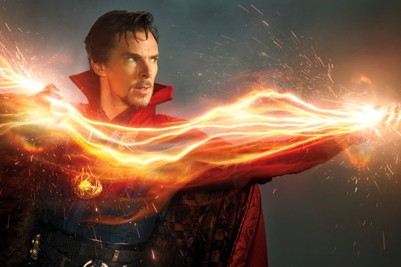 Doctor Strange feels like a breath of fresh air in the now vast expanse of Marvel plotlines. It’s very colorful, but has a dark undertone at the same time. Benedict Cumberbatch (Dr. Stephen Strange) like always, plays the unlikeable genius, but now with an american accent! When Tilda Swinton (The Ancient One) was announced to be playing Doctor Stranges guide through the mystic world of magic and sorcery, it caused an uproar among dedicated fans of the comic books. This controversy was started because Tilda Swinton is American actor and in the comics “The Ancient One” is traditionally Tibetan. Even though I have not read the Doctor Strange comics, I do believe that she did a very good job portraying the iconic character.

Doctor Strange is about a very egotistical, world famous surgeon, named Dr. Stephen Strange, who gets into a car crash BECAUSE HE WAS LOOKING AT HIS PHONE!!! He wakes up in a hospital with his hands severely injured. He undergoes over seven surgeries to try and fix the nerve damage in his hands, but no treatment seems to be working. Strange’s physical therapist gives him the file of a man who was paralyzed from the waist down and was able to recover, so he tracks the man and finds out where he went to get better. Doctor Strange goes to Kamar-Taj to seek help from “The Ancient One” and is taught the ways of magic under her tutelage.

The best part of Doctor Strange is by far the stunning psychedelic visual effects; from the astral projection scenes (astral projection is an out of body experience) to the mirror dimension (a second reality where what you do doesn’t affect the real world). The transformation of Stephen Strange in the movie is very interesting to watch. In the beginning of Doctor Strange, Stephen is very self-centered and narcissistic, but towards the end he learns that he has to sacrifice himself for the safety of others. I did also like the villain of the movie, which is unusual because most superhero villains have become bland and uninspired. Kaecilius (The bad guy) was a pupil of the Ancient One who turned evil, which reminded me of a Kylo-Ren like character. Overall I was pretty satisfied with him as a villain.

Although Doctor Strange is a great movie I do have some complaints about it, (ALSO THERE ARE SOME SPOILERS RIGHT NOW SO IF YOU DON’T LIKE THAT THEN SKIP THIS PARAGRAPH!!) Like if Doctor Strange has the power to turn back time why doesn’t he just go back and save the Ancient One, or better yet just stop Kaecilius from taking the ritual book and opening up the dark dimension. Another question I have is if the sorcerers knew about the Infinity Stones (Several Stones that each possesses a magical power) why didn’t they help the Avengers when Loki was trying to steal one of the Infinity Stones.

If I were to rate Doctor Strange I would give it an 8.5 out of 10, because of its fun exciting story and visuals. If you are a fan of Superhero movies and Benedict Cumberbatch you should definitely see Doctor Strange.