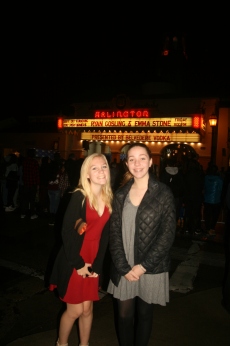 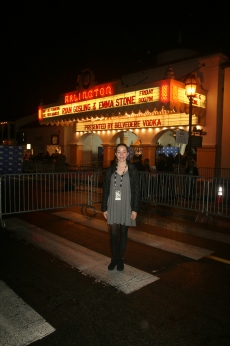 On February 3, 2017, Emma Stone and Ryan Gosling received the Outstanding Performers of the Year Award for their performances in the film/musical La La Land directed by Damien Chazelle. They both been acting for many years and have worked hard in all of their performances in order to get from where they were when they started, to where they are now.

The honorees arrived at the Arlington at around 7:45 in the evening and were greeted with wild excitement from their fans who were waiting along the gate that surrounded the front of the Arlington Theater. After greeting their fans, they made their way to the red carpet as the press snapped photos and asked a million questions about La La Land and their careers. Finally, they made it inside the theater to be presented with their awards.

The night began when Roger Durling came out on the stage to introduce the honorees, Emma Stone and Ryan Gosling. Roger talked about how they made their way from the bottom, to the top of the acting industry. Once his introduction was complete, he asked them to come on stage and join him for an interview.

After Roger asked them a few questions, they played clips from the three movies that both actors were in together, La La Land, Gangster Squad, and Crazy, Stupid Love. In between asking them more questions about their careers, they played clips from a number of films that they acted in separately such as Easy A, The Help, The Amazing Spider Man, The Birdman, The Nice Guy, and The Believer.

As a whole, the event was entertaining allowing the audience to get in a few laughs. It was apparent that both actors were proud of where they are now and were eager to answer all of Roger’s questions to the best of their ability. It was also interesting getting to see how much their acting has evolved and improved over the years from their performances in the films such as  Remember the Titans and Easy A to a musical like La La Land. It was a great experience and definitely one that fans would want to have.