Friday, February 3, 2017 at the Santa Barbara International Film Festival, Ryan Gosling and Emma Stone were given the 2017 Outstanding Performers of the Year Award that was presented by the Director of LaLa Land, Damien Chazelle. This year, I was very fortunate to attend the red carpet. At 7:00, the actors, directors and producers began to arrive at the Arlington Theater to meet their fans who were patiently waiting outside by the gates. Then they walked onto the red carpet to get their pictures taken and they were interviewed by press and continued to walk down the carpet.

My first interview I got was with the directors of Every 40 Years, Eric Goldrich and Benjamin FriedBerg. In response to the question, what was the most challenging part about making a movie about your father, Eric Goldrich told me “The hardest thing was wanting to do what was best for the film. But also knowing that some of the things that was right for the film were going to make my father possibly very angry and will never talk to me again.” Being able to start the night off with this interview helped me get calm and prepared for the rest of the evening.

When I was talking to Beth Pratt, the Filmmaker for The Cat That Changed America. She was very excited to share with me the story about the mountain lion. I asked her how did the film start, and she told us “Well it really started with P22, he is a local celebrity in Los Angeles and anyone who lives around Griffith Park were very excited when they heard about P22 and his adventures and it’s really a celebration of his life and we should be preserving his life and other mountain lions.” She had so many great things to say and she seemed very excited about saving the lives of mountain lions and other animals.

The last person I talked to was Amber Rubarth who is a singer and an actress. I asked her if she knew of other projects she was working on next and she said, “I have an album coming out. I am mostly in music so this was kind of a fun side and a fun diversion for my normal career.” This quote really inspired me because it meant to me that I could do anything I set my mind to. I was very pleased with how the night turned out and it will be a night I will always remember. 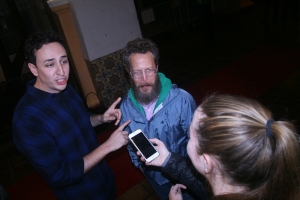