By Chloe Buckley and Isaiah Gil

February 7th, 2017, four directors were presented with the Outstanding Directors of the Year Award. The directors of Moonlight, Manchester by the Sea, La La Land, and Arrival received the award. A couple of local directors showed up as well, and started telling their stories of why they got into directing.

Ivan Marinovic, the director of The Black Pin, directed an amazing movie about a priest, and how he messed up during a funeral. We asked him a couple of questions, the first one we asked was what was his inspiration for this film? He said that he was a storyteller. Since he was a storyteller he wanted to touch on certain areas in this world. He studied abroad and when he had come back to his country he heard of a priest who had made a mess on a funeral and he started there. The next question we asked was does he take real world problems and try to show people why he does this? He responded “It has to resonate with yourself. If you’re working on a authentic film, it has to coincide with something you are growing up through really.” 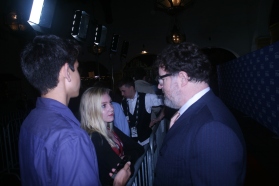 Denis Villeneuve, the director of Arrival, directed an amazing science fiction movie. It’s about spacecrafts that land across the globe. It brings a team together that go against time and try to find answers. He came and we asked him a couple of questions. The first one was what was the hardest part about Arrival? He answered by saying the editing was the hardest part because when you film it, and write it, it made sense but when you see it when editing you can see what’s confusing or not. The next question was what does he enjoy most about editing, or being the director of a movie? He said “About my job, editing is my favorite part because shooting is very stressful. You don’t know when the sun will come out, if there’s clouds, if there’s rain, if the actors will be sick, or they won’t understand what I want to do. Editing is very comfortable, you have all the images in front of you. It’s very powerful, people don’t realize how powerful editing is. You can change the meaning of a scene, you can change it dramatic, comedic. It’s very powerful, I love editing. If I wasn’t a director, I would be an editor.”

Kenneth Lonergan, the director of Manchester by the Sea, directed a touching story about a man named Lee Chandler, who got called to his hometown because his brother has died. He then has the responsibility to take care of his 16 year old nephew. We had the amazing opportunity to ask him a couple of questions about his film. The first the question we asked was how was it like working with Casey Afflack and Michelle Williams? He answered by saying that they were great actors and it was fun watching them search for their characters and watching them create them. The next question was does he have any other projects he’s working on? He answered by saying “I have a number of projects I’m working on, but I don’t know which ones will turn into anything or not.”

The director of Moonlight, Barry Jenkins, directed a very inspirational story about an African-American child named Chiron who lives with an abusive mother in a sketchy neighborhood in Miami. It shows the struggle he goes through to find himself, through the 3 chapters of his life, childhood, teenage, and adulthood. He struggles through the ecstasy, pain, and the amazing feeling of falling in love while trying to find his sexuality. We had the wonderful experience of asking this amazing director some questions. The first question we asked was, what was his biggest challenge throughout the movie? He answered with “Probably doubt,” he then went on to say “Self doubt, you know because no movie is going to be perfect. No shot is going to be perfect, no performance is going to be perfect. If you just stay positive you’ll get interesting things you know. I just always had to check my doubt, self doubt.” We then went on to ask, what was the message he wanted to give off to young kids? He answered with “That we’re all human beings, and that society is often trying to tell us what kind of human beings we should be, and that we should decide those things for ourselves.”

Throughout all these interviews, it shows the story of what they wanted. It shows why they do what they do, and how it affects them as people. They all took something that was meaningful to them and wanted to show the world the message. It showed what it was like for them, and how it might as been stressful, but made an amazing picture. It was an amazing opportunity to meet these talented directors, and ask them questions on their films. They all had a wonderful sense of what they wanted, and how they accomplished it.