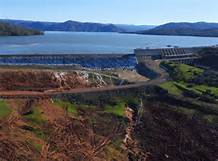 After the big rain storm that was double the amount that the average rainfall in northern California, the dams spillway was over used and had major effects of erosion and had to hold water for a couple days for workers to make changes to prevent flooding the town. The large amounts of fast flowing water has eroded away large amounts of concrete and tons of dirt and stone. Now that the rains have stopped for a while, the Oroville county and the State will give assistance to the Dams spillway and all the damage that the over flow down the river. The dam is still holding even after the hard rain that nearly doubled the average rainfall for the northern Californians.

The Oroville dam Crisis will slowly be resolved and the people of Oroville county will, have this dam emergency spillway rebuilt and have all the damage fixed. The state will give support to the people that homes were waterlogged and flooded. The damage will be rebuilt and the dam will hold water for the entire northern California.