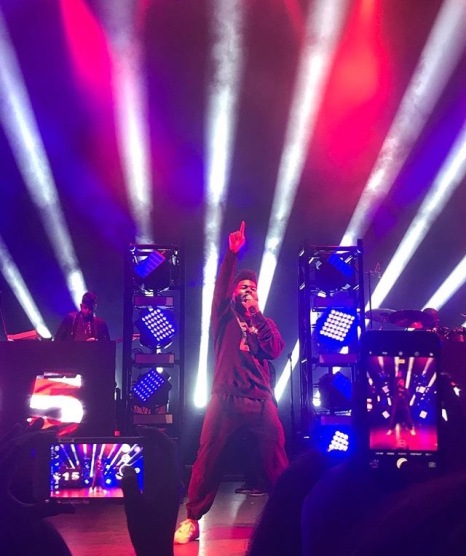 Khalid Robinson, known as just Khalid, is an American singer and songwriter from Texas. He started his career after his debut of “Location”, a song that rocketed him to fame. Following after that he produced his first album, American Teen. He has been touring all around, and on August 30, came to the Santa Barbara bowl.

I went with a couple of my friends and we got to the concert venue at around 6:30. We walked up the long sidewalk to the entrance into the bowl. We gave them our tickets and they exchanged them for the wristbands we would need to get in and out of general admission, or better known as, the Pit.  As we walked through security we were thrust into the center of the whole event. There were people in all different outfits all gathered together for one thing; to see Khalid. My friends and I excitedly walked to where our seats were and met up with more people we knew. An hour went by and then almost two. A DJ played music while we waited and was in charge of getting the crowd hyped. Night fell and people were dancing. We were in the center of the Pit, closer to the front though, and we were in the middle of all the dancing. We bounced with the crowd, and from far away it looked like we were all one. While the DJ was great, we were all still waiting in anticipation for the main show.

Lights started flashing, the beat started at a steady pace, and the crowd started screaming. His first song started and he came out. We all started screaming and rushed forward. The next hour and a half or so, went by in a flash. Khalid played all his hit songs, and he had such a great energy that it got everybody moving. You could hear the whole crowd singing in unison to his songs. We were all dancing and jumping as he played his songs such as “American Teen”, “8teen”, and “Young, Dumb, and Broke”. The lights were amazing, colors perfectly synced with the theme of each of the songs. At one point with his slow songs that seemed to be able to touch everyone, if you turned around you could see the lights of thousands of flashlights blinking within the crowd. He closed with his first ever hit “Location”, leaving everyone touched.

Overall this whole experience was amazing. It was great for all of me and my friends, and it seemed like we bonded even more. Next day was late start which was good because I got to sleep in a little longer, but it was still hard going to school. If anyone ever has a chance to see Khalid I would strongly recommend it. His songs have a way of touching every single person in the crowd.