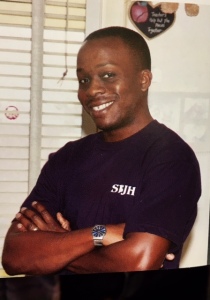 By Camila Angeles and Lila Gibson
At Santa Barbara Junior High we have several amazing teachers. Some who have been here for many years and some who just got here. Either way we are lucky to have them. But lately the veteran teachers have not been noticed as much. We were able to interview one of the history teachers, Mr. Battle, who has been here for a long time and get his point of view on this and the past school years.
The first thing we asked Mr. Battle was how he would make this year better and/or different than previous years. He responded by saying because we have received a lot of new technology this year which he is going to be incorporating that into the curriculum, with a lot of interactive activities. With the technology Mr. Battle believes with the new technology, kids will be able to control their learning a whole lot more. This is a new idea but he’s thinking it will work out well and change it up a bit. We also wanted to gain insight on what his biggest challenges he has faced while working here and what the key is to working in the same place for so long. While Mr. Battle said he loves doing what he does and hasn’t really faced any big challenges, he said if he had to choose his biggest challenge would probably balancing work and play in his classes. He wants to be silly and goof around with the kids, but he also has to make sure the kids are focusing. And when he addressed what the key was he said a mix of luck, and also the fact that he loves doing it. He said if you love what you’re doing it isn’t really work, it’s fun. He does wish at our school there was more student input in what we are trying to do and accomplish. He feels like adults make to many decisions and the students should have some more of an impact in them.
If Mr. Battle didn’t teach AVID and history, he would want to teach science because it is interactive learning and he loves the subject. We found this interesting because it is pretty hard to picture Mr. Battle teaching anything other than history and AVID, especially since when we asked him about teaching both subjects he thought it was a perfect balance. When he’s not teaching though he loves to go the beach, being outside, exercising, and surfing, all with his family. When asked what his favorite thing about teaching, Mr. Battle responded by saying that he loves meeting new people, watching them learn and laughing a lot. Along with his favorite thing about teaching, we asked Mr. Battle what his favorite project of the year was. The slave simulation, which we do in the spring, is his favorite because it is the project that students tend to remember the most. He says that when students are young interactive learning helps them learn better. Last but not least, we asked Mr. Battle what his hopes be are for this school year. Mr. Battle hopes that he doesn’t embarrass his son, Andre, too much, and that he leaves a lasting expression on students.
Mr. Battle is known around the school to be one of the best teachers, and we are lucky to have him.