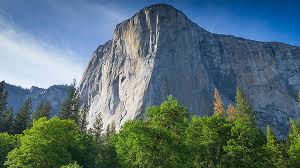 By Carolina Koceman and Zoe Mixon

On September 27 2017, 1:51 through 1:52 p.m a piece of El Capitan rock in Yosemite National Park fell off. There were about 30 climbers there. One was killed and another was severely injured. El Capitan rock is around 4,000 feet tall. The rock was 130 feet long and 65 feet wide. The rock fell from a little bit higher than halfway up the face of El Capitan. The incident came with no warning. Seconds before the rock falling, the climbers said they heard a rumble then saw a giant cloud of white dust from the falling ruble. This rock fall killed a British climber named Andrew foster that was 32 years old. What makes this natural disaster more tragic, is there was a rock fall that was 10 times bigger than the first one on the 28th of September.

On September 28, 2017 there happened to be another rock fall that was believed to be 10 times bigger than the rock fall a day before. The rock fall was the size of a 13 story building. The fall happened around 3:30 p.m. The plume of dust covered the valley floor. The dust was so thick you couldn’t see through it. On Wednesday during the first set of rock falls, over a four-hour span, seven rock falls took place. This caused about 1,300 tons of rock to fall off. This rock fall was in the same location as the previous one but much bigger. The second rock fall caused one elderly man to be taken to the hospital injured.

The two days of rock falls happened to fall in the same place. Greg Stock, a Yosemite geologist, said that the rock fall was not due to climbers and their climbing gear but possibly because of the granite rock. It was probably due to the expansion and contraction of the rock during summer and winter. In the summer the rock expands, and in the winter the rock contracts and becomes more brittle and prone to things like rock fallings. Yosemite officials are informing visitors to exit Yosemite Valley through the southside Drive. Something like this has not happened in long time. Last time a rock fall took place a climber accidentally dislodged a rock and it fell slicing the climbers climbing rope. Overall this two day span of rock falls came as a surprise to the public. Yosemite officials advise visitors and climbers to be cautious when hiking and climbing.