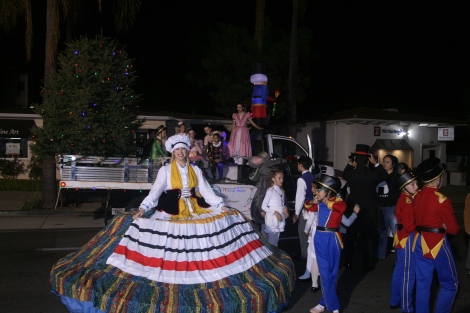 Last Friday, December 1st, the holiday parade took place on State Street. Up and down the streets there were colorful floats ready to show off their beautiful glow. As the people and floats waited, there was music, dancing, and laughter. There were people wandering around in beautiful costumes as little kids sang Christmas songs. Flying above the street would have been a wonderful sight to see. Suddenly, floats began to move and one after the other they filed onto State Street. Their beautiful lights filled State Street with so much cheer and the entire crowd’s faces were lit up. The experience is always so wonderful.

Santa Barbara Festival Ballet is where I dance. We have a float, and it is themed for the Nutcracker. For the people who signed up to be in the float, the fun begins in the studio when everyone is getting into their costumes and getting ready. Once everyone is ready, we walk to our float, and the Artistic Director of the show puts us where she would like us. I was Clara, so she had me stand at the front of the float. All my friends were sitting down below me. There was the soldier doll, ballerina doll, and harlequin doll on one side and a Spanish dancer, a shepherdess, and a mirliton on the other side. Walking around and behind the float were the rats, soldiers, party boys, party girls, party parents, bakers, mother ginger, and her ginger snaps. Once the float began to move you could feel all of the energy and excitement of the other floats around us.

As the float moved into the area with people lining the sides of the street everyone began to wave. I stood at the top of the float, and looked out onto the smiling faces. We went further and further down the street and everyone’s arms began to hurt and our smiles were sore. Although, we kept our energy high because when people saw us they were always smiling. The Holiday Parade is always an amazing experience filled with cheer. It is such a fun event for all of the people in Santa Barbara.