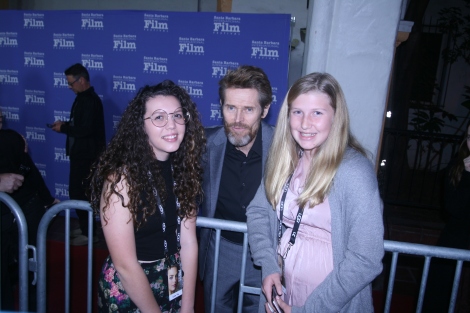 By Carolina Koceman and Gigi Padilla

On February 1, 2017 at the Santa Barbara International Film Festival, aspiring actors and filmmakers gathered with an appearance by honored guest Willem Dafoe.

The first guests we interviewed made a documentary on scotch. The film was called “ Scotch: A Golden Dream”. This film is a documentary about the history of Scotch and the people who make it. The biggest challenge for this film, according to its filmmakers Andrew Peat, Michael Pukish, Yang-Hua Hu, and Patrick Cemsoplano,  was the editing. They had about 67 hours of footage and had to narrow it down to about 84 minutes. The filmmakers came from different backgrounds but ended up together as one filmmaker went to school with the other two filmmakers, but at each at different schools. Two went to UC Davis and the other two went to USC. This was their first time at the Santa Barbara International Film Festival.

The next interview was with a man named Yonatan Nir who made the movie The Essential Link. The inspiration for this project was that he grew up in Israel and there was always a house called the Wilfred House. The man was very rich and later in Yonatan’s life, he found out that he saved tens of thousands of people during the Holocaust. The biggest challenge of making this film is that this man died many years ago and not many people still remember him. Yonatan said it was difficult to find documents and evidence of this man.

We also interviewed two men from Barcelona, Spain. They are the judges of the night. They are judging International as well as Spanish and Latin American.

Finally we had the pleasure to interview Willem Dafoe. Willem Dafoe was there for a movie he starred in called  The Florida Project. Going into this film Willem Dafoe said this will be difficult. Dafoe didn’t think if this movie as a challenge, he was always happy to be there. This compares to previous projects in the past because they were working with non professional actors as well as filming at a functioning motel. The film festival was a great experience.