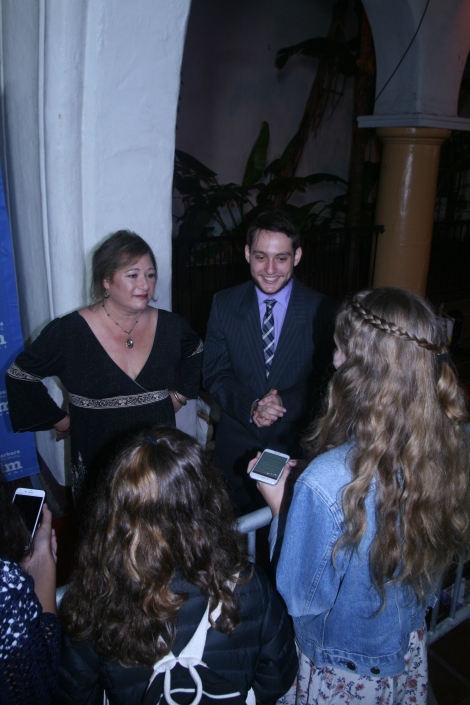 We asked them their first question, “what gave you the idea to make this documentary?”

They said, “This idea mainly came from Kenan who is sadly not with us. He is working with the peace corps in Africa. He knew Jamie and he knew the Santa Barbara bird sanctuary. So, he pitched this project to to this course at UCSB called green screen. So, with the support of UCSB documentary about Jamie and this wonderful sanctuary.”

The next question we asked was, “What was the message you were trying to send with this documentary?”

They responded, “I think the message we were trying to send out is very much the good work that Jamie does.” The man asked Jamie if she would like to speak. She said, “Absolutely, you know people are very attracted to a parrot. They are beautiful, they are intelligent, they can talk sing and dance, however this is not like owning a dog or a cat. They are like a two year old child that in many cases have a human life span. The average person finds it very difficult to fulfill their complex social needs. The parrot’s life is you. When you have a parrot they don’t just change your life they become your life. In many instances people can’t fulfill that commitment whether they get neighbor complaints or spouse ultimatums. There are parrot rescues nationwide that are all at capacity.” The man cut in, “And that’s where place like our sanctuary come in, help out, and educate the communities, not just take in birds. We want to keep these things from happening. We want people to become wiser and better at taking care of these communities.”

The next question we asked was, “What were some challenges that you faced when you were creating this project?”

They said, “The biggest challenges have been after the film with the fire and the mudslides. During the film project this biggest problem when working with birds is sound. They scream at 135 decibels which is why I am deaf! Which is why when we started doing sound editing we had to really curate what was around us. The birds will squawk and squawk and you got to work around it. They’re wonderful, but they’re noisy.”

The next question we asked was, “how does it make you feel when you find a bird that needs tremendous care or help?”

They said, “It is heartbreaking because we are at capacity. We get dozens of emails everyday from people asking us to take their birds. The birds have such complex needs as far as their diet and their care. The funding to care for all of them is very difficult to come by. When the Thomas fire happened we had to evacuate the facility and we had six satellite evacuation centers that were literally chased by the Thomas fire. We relocated three different times until they saved the facility in Ventura. Then we thought it was safe to bring them home we cleaned out the facility. Then El Grande Muchacho, not El Nino, came along and turned Summerland into an island of mud. The sanctuary still is really in need of funding. We have been reaching out for help.” The man said again, “Jamie actually made a website.” Jamie said, “We have a funding campaign going on and since it is February and this is the month for giving and receiving love we are hoping people will open their hearts to our flock. The website is fortheloveofbirds.org. We had a friend of the flock step forward and offer to match any donation up to twenty five thousand dollars. So, we are hoping we are going to get by with the help of our friends.”

The next question they were given was, “If there was anything you could change or add to the film what would it be?”

They said, “Just what we discussed. There is so much that has happened that could be a whole second film about just the fires the mudslide. And our youth mentorship program. We actually have a learning center for youth. And we do programs. WOW, which is called world of wings, is where we bring out birds from different parts of the world and talk about them. We have another class about PALS, which is about parrots, art, literature, and science. We even did try to get a bit of this in film. The footage we gained we could not use, but the sanctuary is doing so much. Keenan and Kevin and the UCSB group did such a fabulous job of bringing my experience with these birds up on the screen. So, I am very grateful that they not only saw my vision, but understand, believe in it, and want it to succeed.”

They thanked us with a smile and we happily thanked them back. They walked down the rest of the red carpet with smiles glued to their faces.