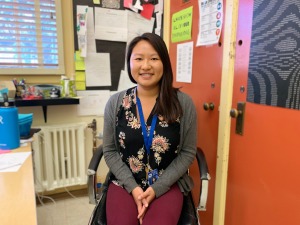 Did you know these 10 things about Ms. Yeh? When asked to use 3 adjectives to describe her personality she replied, “I would say, I’m actually a very shy person when I’m not teaching. Very honest and a little sassy.”

Ms. Yeh was inspired to become a teacher from a young age, because a lot of her family members had been teachers, such as her grandma and a lot of her aunts and uncles. She thinks that’s something that has always been shared with her. From the age of 14, she was a tutor, all the way through college, and then when she was in college she worked at Dos Pueblos High School. All the kids there inspired her to want to be a teacher. She chose to teach math because it was the only thing that she felt she was good at. Ms. Yeh’s favorite thing about teaching math is the ah-ha moment, she said, “that’s my favorite sound to hear.” And her least favorite thing is grading and giving tests.

The teacher that had the most impact on her was an Italian teacher she had when she was in high school. She says “She impacted me the most because she actually cared about who I was. She would talk to me about my weekend and she’d talk to me about all types of sports and tv shows and going shopping and restaurants and she actually wanted to know who I was and that was important.” In school, her favorite subject was her history classes. Because even though she is a math teacher she struggled a lot in math when she was in high school. She says “I really enjoyed the stories of history.”

Some of her interests besides math are reading different books, such as history books and learning about different cultures. “I haven’t read as much as I would like to,” she says, “typically on the weekends I’m also hiking.” Three things she can’t live without are her coffee, her computer, “shamefully”, and at least one book. Ms. Yeh’s top three favorite books are Big Little Lies, The Romantics, and the Harry Potter books. What she does to relax is listening to music, “some good music, any type of music it just has to be playing” she says. It was great getting to know Ms. Yeh through her responses to my ten questions.