By Sasha Drucker and Addie Sweeney

On Opening Night of the Santa Barbara International Film Festival, Sasha Drucker and Addie Sweeney interviewed the up and coming filmmakers who walked the red carpet.

Here are the interviews:

Bronagh Gallager – star of A Bump Along The Way

CP: can you tell us a little bit about your film?

BG: um yes, so my film is basically a mother in her forties that gets pregnant in a one night stand, and it’s a ridge between her and her daughter. And the sort of humiliation her daughter gets from the situation that occurs, and

she has to get over it and come to terms with it and choose to stick together.

CP: How did you prepare for this role?

BG: basically worked a lot with the director and obviously with my co-actors, and we worked hard for about four days on the script, and we worked really hard on it and rehearsed and then we went up to Derry and shot it.

CP: How is this role different from some of your other roles?

BG: I’ve never actually played a character before that has a baby after a one night stand. And well, ah, basically anything that’s well written is a lot easier to get your teeth into. And it’s very well written – a very real and believable character.

CP: How are you feeling about opening night?

CP: What are you most excited about?

RD: oh my goodness, hard to say. I’m excited for the writer’s evening, the director’s panel, and the producer’s panel; Florence Pugh, who was nominated for a golden globe for little women, I’m very excited to see her on the red carpet, I may be stalking her. You guys are too young to watch midsommar  but the fact that she’s coming here; Cynthia Erivo, and of course throw in Brad Pitt, who’s not excited for Brad Pitt.

CP: Can you tell us a little bit about your film?

AS: Sure, my film’s called Americaville, it’s a feature documentary about a replica of the American wild west in China, 2 hours north of Beijing, the capital.

CP: How did you get into film?

AS: I got into film, well I went to school for film here in California at Stanford University, and after graduation,I moved to China, and I have gone to China since I was very young so I sort of returned to China. And I started making very short videos there and then started making longer and longer films.

CP: How did you find out about this replica?

AS:  I found out from a friend who I had dinner with and I had just finished a film, in a much larger city in Mongolia. They knew I was going back to the US to promote the film, so they asked me, “have you heard about this American Town?” I said, “I haven’t,” so I googled it, or used the Chinese google which is called, Wygu, and found some information online, and then rented a car and had to persuade my way in past two security guards, and they gave half an hour, and luckily I met the founder who invited me to stay there for a weekend and after that weekend I proposed making a feature film about this town and he said yes.

CP: Would you say that the replica is a pretty close match to what we’ve seen of the Old West in American films?

AS:  It’s a pretty similar replica, but it’s all Chinese people living there and they all have their own ideas about America, which are not necessarily correct, maybe for a 1950’s America.

Casey and Ryan Higginbotham – Featured in documentary, By Hand

CP: your documentary is about going from Alaska to Mexico, so tell us about what inspired you to do this

CH:  we came to a time in our lives where we wanted something more, and we were really looking for a big adventure, in a way a right of passage, something to be incredibly difficult to do, so we decided that was it.

CP: aside from the physical labor what was your biggest challenge?

RH:  really the day to day grind, you have a rough day, a rough week, and your cold wet and hungry.  And then you still got a 1000 miles in front of you, just to compartmentalize every day.

Cp: you made this journey, but were there any points where you were scared for your lives?

Diego Tinoco – star of On My Block

CP: How would you say you’re feeling about being the youngest judge?

DT: It’s an honor and a privilege, and I’m really excited.

CP: Are you nervous

DT: I’m a little nervous, only because I’m not the biggest fan of trying to judge a film because I love all movies and I think you can pick and choose every single movie and find at least one thing that you love about it, and we’ll see how it goes, I’m definitely looking to find the one that’s most inspiring, the one you can relate to a lot, you know what I mean?

CP: You say you have a love of film, is that kind of how you got into acting?

DT: Yeah, I would say just growing up, watching all sorts of movies with the stars like Leonardo DiCaprio, Brad Pitt, Antonio Banderos, watching those guys just inspired me to be an actor.

CP: Brad Pitt is gonna be here, as well as Adam Driver and some other pretty big names, so are you excited to see them here?

DT: Yeah, I’m very excited, I grew up watching Brad Pitt’s movies, and I recently started watching all of Adam Driver’s movies, he’s an amazing actor, ex-marine, and I’m very excited, hopefully, I get a chance to talk with them. I’m still really young and I’m still learning a lot, this is all really new to me. Even being here, it’s a new experience, and I’m just trying to take it all in.

CP: Can you tell us a little bit about your film?

AR/GR: Our film is The Restoration, it takes place around 2010 when there was a big construction boom in Lima, Peru. What happened was that a lot of people were selling their old historic/colonial houses for big profits. The main character is in his 50’s, he’s very depressed, he’s recently divorced, but it’s a comedy. It’s really funny. It’s a depressed old man but it’s really funny. SO what happens is he moves back in with his mom and it’s his mom and him in a big house, and he decides to sell the house behind his mom’s back. She doesn’t think it’s such a good idea, so what he does is he makes a room that’s just like her bedroom, and he sells the house, parties like crazy. It’s a really funny movie. It’s a dark comedy, and it deals with some things that are quite real and very serious. The landscape of Lima’s been changing all of the city, where profit is all of the motivation, so there’s buildings being destroyed. He learns some things in the process.

CP: Ok, so would you say if you were in your character’s position would you do what he did? 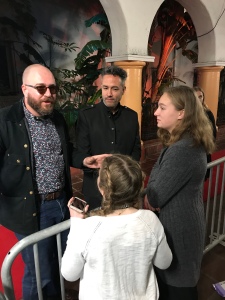 AR/GR: I would never, but it’s fun to imagine it. I think it’s a really funny thing because I think the film actually challenges you to take the mental position of the character. There’s a lot of humanizing in the movie, the fact that he’s such a messed up guy sort of helps you understand his actions a little bit.

CP: Was your character based on anyone, or was he solely created for the purpose of the movie?

AR/GR: I shouldn’t say this, My family should not hear this, but it was loosely based on a close family member. I sort of took his character and changed it for the movie and played around with it.